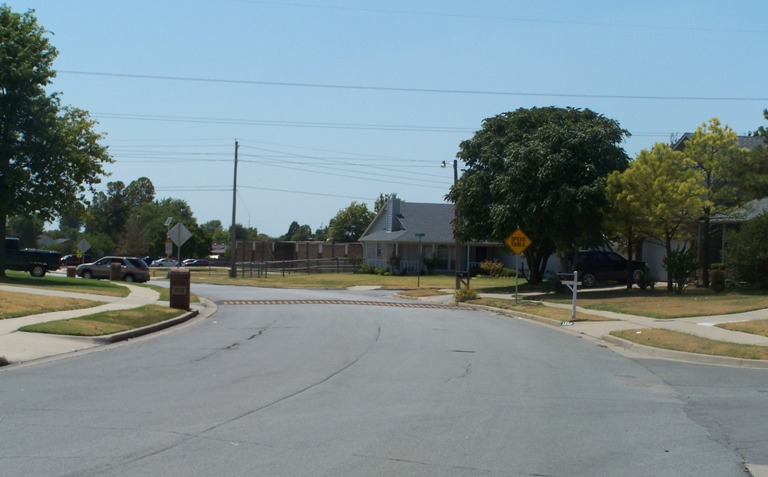 Today, because of the increased dependency of vehicles for mobility, we see a dramatic increase in vehicle speeds and daily neighborhood traffic volume on local streets. Additionally, as a delay on arterials has increased, some motorists have decided to bypass the congested arterial and use neighborhood streets to get from one arterial to another or as a shortcut to their destination.

When concerns regarding traffic speeds, pedestrian safety, and cut-through traffic arise in residential areas, it is often frustrating for both residents and traffic engineers. Neighborhoods often request a quick fix solution such as enforcement, reduction in posted speed limits or the addition of stop signs. This type of fix often increases the pressure to implement haphazard solutions that may not be in the best interests of the neighborhood, the city or the traveling public.

Traffic calming involves the application of engineering techniques to physically change the character of streets, improve pedestrian safety and encourage drivers to obey speed limits. A variety of physical devices can be used to alter the geometry of the street, along with more traditional traffic engineering techniques to slow traffic. Generally, a successful traffic calming plan is not a single device, but rather a series of integrated improvements to slow traffic and/or direct traffic to more appropriate routes.

It is the intention of the City of Owasso Neighborhood Traffic Calming Program to address traffic problems and concerns on local streets and applies to all residential subdivision streets in the City of Owasso. While not intended to make streets play areas for children or adults, the Program is intended to generally improve safety for pedestrians, bicyclists and others who travel along or across these streets.

The residential speed limit in the City of Owasso is 25 miles per hour. Initial attempts to provide traffic calming has centered around stop sign installations to affect speeding and cut-through drivers on collector and local residential streets. Since February 1995, the city has administered the Policy of Residential Neighborhood Traffic Control. This policy sought to discourage all traffic from traveling at excessive speeds through neighborhoods. As more multi-way stop signs are installed, there are fewer and fewer reasonably spaced locations for sign installations. Additionally, stop signs have not allows been effective and may present a greater risk due to driver failure to stop. These guidelines provide city officials and residents with the opportunity to recommend, select, analyze and critique measures aimed at improving traffic conditions in and around local neighborhoods.

Depending on the specific location and the residential street classification, the purpose of traffic calming is to restore streets to their intended function to provide combinations of mobility and accessibility.

Experiences in other localities have shown that traffic calming is not a program that can be implemented under strict guidelines. Various solutions are often available and a successful program depends on staff and citizens that are willing to work together toward a common goal.

Based on cost, ease of construction and availability of materials, the speed hump is recommended to be the primary traffic calming device for existing residential and collector streets in Owasso. In general, speed humps have been found to reduce traffic speed, volumes and accidents. In addition, they discourage through traffic from using a local street as an alternative route to inconvenient or congested arterial and collector streets.